Remember back when there was no such thing as LED navigational lights? We do. Luckily, times have changed! Boat light technology has changed, for the better! 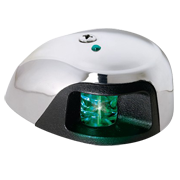 Gone are the days when all the navigational light lamps on boats where fitted with little incandescent bulbs that used to burn out at the first sign of night or foul weather. The little bulbs were always standard white-yellow light. Red or green side colors were dependent exclusively on the lens. Water would get into the lamp housing and corrode the bulb contact points. Again, it would all work fine until the fog horns started blowing or a big squall flew by!

But luckily for us sailors and boaters that have been out at night and have had the navigation lights fail on us, now we have LED technology!

LED stands for “Light-Emitting-Diode.” We’re not going to get into the details of how they work, but suffice to say, they are bright, they last a long time and they use up very little power – All good things on a boat! Because they don’t have to be replaced like you would with an incandescent bulb, the LED can be completely sealed inside the lamp-housing unit. This means you can say bye-bye to corrosion problems within the lamp itself.

Although you can get lamps with colored lenses, the diode itself is not necessarily dependent on the lens for color. The diode itself can be manufactured to light white, red or green. So even if the lens is clear, if the diode is a red one, it’ll look red just fine. No need for a red lens.

LED lights for boats can be designed to run extremely bright. In fact, these days LEDs can be made to be as bright, if not more, than some boating spot lights. You don’t want to go that bright for your navigation lights, but the point is you won’t be lacking in the power department.

It’s worth noting too that most LEDs won’t get as hot as incandescent bulbs. Even powerful LEDs can be installed on a heatsink that will suck up any extra heat and keep the LED safe and the lens relatively cool. The reason for this is because LEDs are much more efficient than incandescent bulbs and don’t waste a bunch of power in the form of heat.

LED navigation lights are so efficient that you can run them for hours and they will not drain your battery the way other lights will. If you ever have a mechanical failure and have to anchor at night somewhere, you can likely run your masthead light all night to keep you safe even if your broken engine is incapable of charging your batteries. If you run a dinghy at night, you can fit it with portable LED navigation lights that run on simple batteries. Thanks to the low power consumption of LEDs, those standard batteries will last a long time. Another benefit of low power consumption is that running solar-powered courtesy lights is now very effective. A tiny solar panel atop the light head itself is enough to charge it’s internal battery to run the lamp all night.

Various companies are making boat navigation lights for all types of navigational applications. Meaning: LED sidelights, pole mounted bi-color sidelights, masthead lights, transom lights and single unit all-round lights for bows on small boats. When you discover the awesome benefits of switching all your navigation lights lamps over to LED you likely won’t want to stop there. At that point, you might want to change your cockpit and cabin lights to LED as well. Why not? Prices on boat LED lights are better than ever.

One other detail worth mentioning is the warranty manufacturers offer on LED navigation lights. They are unheard of in incandescent light products. Some manufacturers like Attwood marine products are offering a 10-year warranty on their LED navigation lights. This is based on the fact that Attwood rates their LED lights at 50,000+ hours of use. Now that’s impressive.

Next nightfall, storm or fog that rolls through will find you with properly working lights!

Where to buy: You can buy the Attwood LED navigation lights for your boat at West Marine.

We love boats! We love everything about boats! FloatWays is dedicated to the art of boating and sailing. Whether it be in the ocean or the lake, we are devoted to the lifestyle and all the joys that come from being on the water. We are people who have practically been raised aboard boats. At the same time, FloatWays believes in being humble, friendly and down to earth (er … END_OF_DOCUMENT_TOKEN_TO_BE_REPLACED

At FloatWays we pay a lot of attention to the visual aspect of the water activities in which we participate. This means we are focused on enjoying our outdoor life by making sure we have the best optical clarity and sun protection we can get. Not only that, but we like to look good while doing it. We've created this sunglasses guide for that very reason. As we look into what the market has to offer for functional and stylish sunglasses and review them on FloatWays, we'll … END_OF_DOCUMENT_TOKEN_TO_BE_REPLACED