GoPro announced the release of the HD Hero 2 camera as a follow up to their hugely popular HD Hero. Of all the features we are mostly excited about the various field of vision angles. 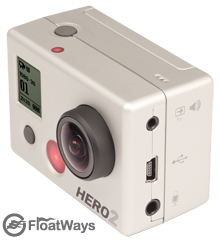 At FloatWays we use GoPro HD Hero cameras to film regattas from inside the boat and for various watersports activities. We use one when we go windsurfing, kiteboarding, surfing and even snowboarding. Some of us are car fans too, so we use them for that as well.

One request we’ve had for the longest time when speaking with the high-ranks of GoPro authorities is that we wanted a camera that allowed for a narrower field of vision. We love the original GoPro HD Hero, but found ourselves often needing to combine footage from one of them with the footage from a standard angle HD camera. We’ve been doing this to help add more variety to the shots in a multi-clip video. Well, now we can do it using strictly GoPro cameras!

We haven’t gotten a hold of one yet, but as soon as we do we’ll be reviewing it here. However, on paper, the specs look astonishing. Here are the biggest highlights:

It has a bunch more features including some extra accessories like a WiFi BacPac and remote. However, what we listed above is what we’re mostly looking forward to. Once we test one out we can decide what new goodies we should get for it. Over at FloatWays we’re not only connected to boat people, but surfers, skaters and mountain bikers too. So we definitely put these cameras to good use.

A few months ago we put together a feature to show you how to create a multi-angle sailing video using only 1 GoPro camera. Read that feature article here. Soon, we’ll be combining the power of the original HD Hero cameras with the new niftiness of the HD Hero 2.

Stick with us by subscribing to the FloatWays YouTube channel.

We love boats! We love everything about boats! FloatWays is dedicated to the art of boating and sailing. Whether it be in the ocean or the lake, we are devoted to the lifestyle and all the joys that come from being on the water. We are people who have practically been raised aboard boats. At the same time, FloatWays believes in being humble, friendly and down to earth (er … END_OF_DOCUMENT_TOKEN_TO_BE_REPLACED

At FloatWays we pay a lot of attention to the visual aspect of the water activities in which we participate. This means we are focused on enjoying our outdoor life by making sure we have the best optical clarity and sun protection we can get. Not only that, but we like to look good while doing it. We've created this sunglasses guide for that very reason. As we look into what the market has to offer for functional and stylish sunglasses and review them on FloatWays, we'll … END_OF_DOCUMENT_TOKEN_TO_BE_REPLACED