The America’s Cup World Series took over San Diego starting last weekend when the torrential rains put a damper on racing. The weather throughout the weekend improved a bit, but was riddled with crazy morning fogs. 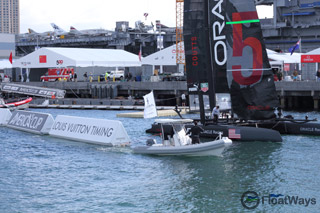 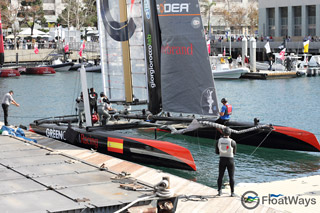 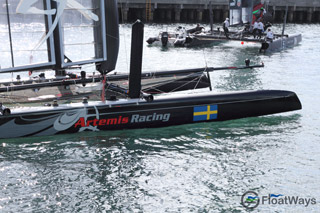 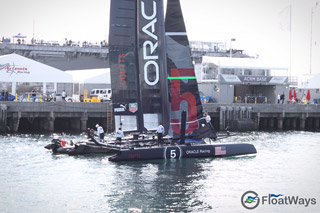 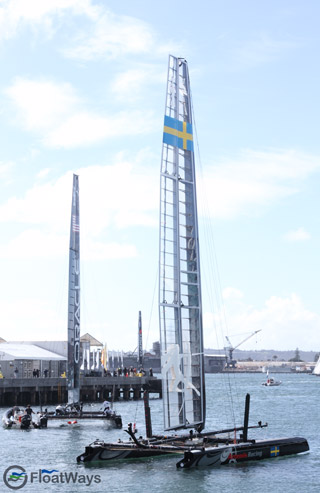 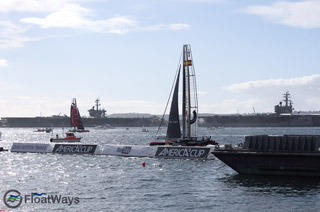 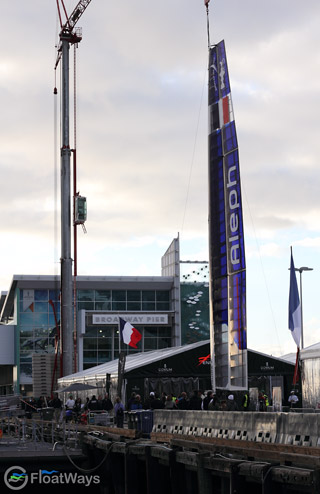 Good thing the weather cleared up by Saturday November 19 went the FloatWays crew was coming down to check out the action.

This post is going to be about showing you guys some photos of the AC45 boats with the wing-sails. These are incredible boats are faster than anything you’ve ever seen with a sail. We wrote a little bit about the AC45’s in our recent article about the fastest sailboats.

One thing is to see photos and videos, but it’s a whole other experience to see them in real live action. And this is San Diego, where a 5-year old blowing birthday candles has more wind-power. Nevertheless, even in the light winds, the AC45 boats are incredible to watch. What’s more incredible is the speed they generate in such light winds. One of the commentators was saying these boats sail at twice the wind speed, and at a cost of $500,000 – However, after searching around, we found an article on Sail World here that puts the price of an AC45 at EUR 650,000 which is more like $879,000 USD. Who knows? We wouldn’t be surprised if the price was more like 1 million.

We were glad we made it down to check out the boats when we did. The weather hasn’t been the best the last couple of weeks, but this Saturday was a good one. The turn out was great as well. The entire day saw crowds of random spectators and sailing enthusiasts alike. The entire America’s Cup village was busy. The setup the America’s Cup puts together for these World Series events is absolutely unreal. You would think it would take them weeks to assemble. But no, it’s all done in a matter of days. The gear and structures these guys carry around cannot be matched by 10 circuses. What’s most impressive is the giant cranes used to remove the wing sails after each race day. These have to be put back on the boats the following morning.

The weather forecast for the Sunday finals didn’t look too good so most people probably figured that Saturday was the best bet. That might explain the big crowds. From looking at the videos on the America’s Cup YouTube channel, looks like while overcast, the last day of the regatta was windy – Shifty and gusty, but windy nonetheless. Good to see. The Sunday finals ended up being great after all.

And by the way… Oracle wins!

Looking forward to the America’s Cup in San Francisco in 2013 where the larger AC72 boats will be raced.

See at the bottom, after all the photos, for one of the videos from the AC YouTube channel.

We love boats! We love everything about boats! FloatWays is dedicated to the art of boating and sailing. Whether it be in the ocean or the lake, we are devoted to the lifestyle and all the joys that come from being on the water. We are people who have practically been raised aboard boats. At the same time, FloatWays believes in being humble, friendly and down to earth (er … END_OF_DOCUMENT_TOKEN_TO_BE_REPLACED

At FloatWays we pay a lot of attention to the visual aspect of the water activities in which we participate. This means we are focused on enjoying our outdoor life by making sure we have the best optical clarity and sun protection we can get. Not only that, but we like to look good while doing it. We've created this sunglasses guide for that very reason. As we look into what the market has to offer for functional and stylish sunglasses and review them on FloatWays, we'll … END_OF_DOCUMENT_TOKEN_TO_BE_REPLACED