In a way, the America’s Cup can be compared to the Olympics. Not of the same worldwide magnitude, but a gargantuan event nonetheless. 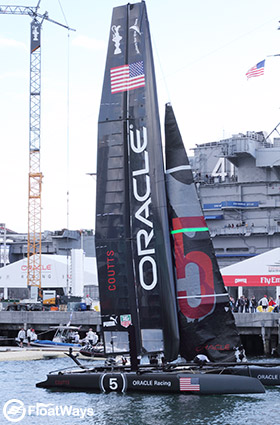 The America’s Cup in San Francisco is said to create thousands of jobs. The local economical boost is expected to be upwards of a billion and a half. This comes thanks to the millions of people attending the event as spectators, participants and workers. The entire region, not just San Francisco, needs to prepare for such an event.

The bay area is heavily populated and transportation will be an issue. The area is also known for very few car-parking areas and the ones available are extremely expensive. Public transportation, along with its capacity and accuracy, will be very important. It will have to be boosted for 2013 and the biggest sailing event in the world.

The city needs to provide large spectator areas along the water’s edge. Some of the historic waterfronts are being rebuilt and modernized. Sanitation needs to be up to the task of dealing with millions of people through the time the event is taking place. There are also some environmental issues as well. Some environmentally sensitive areas, such as Crissy Field, Marina Green and Aquatic Park will supposedly be opened to accommodate people. This of course means long fence lines will have to be erected to keep the sailing event’s spectators away from the sensitive areas.

…many business owners are being kicked out, but at least there’s a sustainable economic boost. We sure hope that works.

The boats and competitor crews need a large working area as well. This means a huge dock area will be needed. According to sources, a large center is being created for the teams on city property. This has resulted in dozens of current tenants being evicted and relocated – very unhappy business owners if you ask us. It is said that eventually, the center will be used as a cruise ship port in order to create a sustainable economic venue as a result of the America’s Cup. In other words, many business owners are being kicked out, but at least there’s a sustainable economic boost. We sure hope that works.

Other environmental concerns include spectator boaters dumping organic waste – aka: sewage, crap, poo – into the bay. As it is, environmentalists say it’s an on-going problem with the usual number of boaters and sailors. Now, times that by however many more boaters will be out during the event and you’ve got a serious problem. So in essence, the city is going to have to place special attention to educating boaters not to dump their holding tanks into the bay but dispose of them properly at dock sewage facilities as should be done anyway.

Once important point to remember is that previous America’s Cup events have been different – they have usually been held far out at sea. Now, with pressure to increase exposure and to get spectators more involved, this America’s Cup will be held close to shore. The official course hasn’t been set this early on, but in all likelihood, much (if not all) of the event will be held in the bay itself. There have been talks about sending the boats under the Golden Gate Bridge, but most likely the event will take place close to Alcatraz and the city instead of out in the ocean. FloatWays has ran into some talks about Alcatraz being one of the prime viewing spots. We shall see.

If you didn’t know, the reason San Francisco is the host of the 2013 America’s Cup is because billionaire Larry Ellison, of Oracle fame, wanted it so. Since Oracle won the event in Spain, he won the right to choose the location of the next America’s Cup Finals. The two piers that will be the center for the boats and crew are being developed by Ellison and Oracle.

For more information about the fastest sailboats in the world, read this article about the AC45.

We love boats! We love everything about boats! FloatWays is dedicated to the art of boating and sailing. Whether it be in the ocean or the lake, we are devoted to the lifestyle and all the joys that come from being on the water. We are people who have practically been raised aboard boats. At the same time, FloatWays believes in being humble, friendly and down to earth (er … END_OF_DOCUMENT_TOKEN_TO_BE_REPLACED

At FloatWays we pay a lot of attention to the visual aspect of the water activities in which we participate. This means we are focused on enjoying our outdoor life by making sure we have the best optical clarity and sun protection we can get. Not only that, but we like to look good while doing it. We've created this sunglasses guide for that very reason. As we look into what the market has to offer for functional and stylish sunglasses and review them on FloatWays, we'll … END_OF_DOCUMENT_TOKEN_TO_BE_REPLACED